The US national anthem is notoriously difficult to sing. One problem is that it spans a wide range. If a singer chooses the wrong key, or drifts from the key they intended, they can find themselves struggling to hit notes at the very top or bottom of their range.

Most melodies are not as hard to sing as the US anthem. Besides having a narrower range, melodies tend to have notes spaced closely together, with not so many leaps between notes. Researchers call this universal feature of melodies pitch proximity.

SMART Lab director Frank Russo has proposed (here and here) that constraints such as pitch proximity may accommodate ease of vocal production. In other words, with or without their awareness, musicians have a template of what a melody should sound like that is based on what people can sing. It makes sense that musicians should tend to constrain their melodies in this way. Our first exposure to music-making is through singing. And it remains the easiest way of producing the music that is in your head. 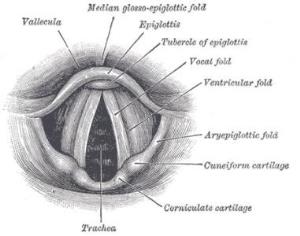 We also showed that, when skips do occur in vocal melodies, they most often fall in the lower (i.e., more comfortable) part of the range. We refer to this as low-skip bias. Interestingly, although we found less low-skip bias in instrumental melodies, it was still apparent. This was puzzling since, unlike with singing, on many instruments (e.g., piano, strings) it is just as easy to play a high skip as a low one. 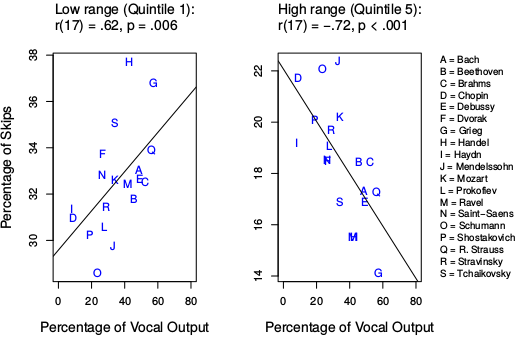 These findings are consistent with the idea that, whether writing for the voice or an instrument, musicians' melodic choices are influenced by singability.

As music perception researchers, we are interested in how a listener's vocal template may impact how she listens. For example, a recent study showed people (including trained pianists) are better at remembering vocal melodies than instrumental ones. What about expectancy? Many researchers consider music's emotional power to lie in its ability to fulfill and deny our expectations. Are expectations for what note comes next in a melody shaped by an awareness of what is singable?
Posted by Paolo Ammirante at 10:40 No comments: